The National Republican Senatorial Committee is accusing Collins of running against Sen. Kelly Loeffler, a Republican incumbent appointed by the governor, out of his own “selfish” interests — while raising alarms that the bid has jeopardized the party’s chances to hold onto two GOP seats and made it harder for President Donald Trump to carry the Peach State in the fall.

Caught in the middle are a host of influential GOP strategists who have worked for Collins in the past but are reticent in getting caught up in a nasty battle that could hurt Republicans’ chances at keeping control of the Senate majority. The congressman’s pollster, John McLaughlin, who also polls for the President, won’t join Collins’ Senate campaign after the Trump campaign made clear that their consultants will not be working against sitting GOP senators, according to multiple sources.

Several sources also told CNN that Collins’ consultants from the firm Convergence Media, which worked on digital and email strategy for his House campaign, will not sign on with his Senate campaign.

The internecine warfare has GOP leaders increasingly worried that the Georgia race is one of their two biggest vulnerabilities as they seek to hang onto the Senate majority in the fall, according to multiple officials. The other is a Republican primary for a US Senate seat in Kansas
featuring the divisive conservative Kris Kobach. 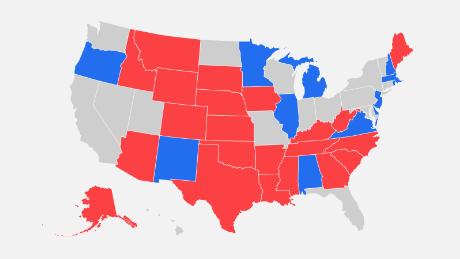 In Georgia, the Collins campaign is now accusing the NRSC of playing hardball by seeking to blackball its vendors, alleging the organization of “threatening” its vendors in a bid to choke off assistance to his campaign. The campaign would not specify which vendors had been threatened.

“The Senate committee doesn’t want any pesky voters getting involved in their version of democracy … they are trying to shut down any competition,’ said Collins spokesman Dan McLagan. “The NRSC is threatening vendors, calling their clients and pressuring them to not work with us. Now, instead of a normal group of consultants, we are forming a group of grizzled freedom fighters taking on the establishment.”

McLagan, the Collins spokesman, added: “Doug is clearly the best candidate, we’re way ahead and we are facing a Romney Republican who has been bubble-wrapped by her many, many, many handlers because she’s not a very compelling candidate. I’d rather be us than them.”

The NRSC fired back.

“Collins is everything Georgians hate about Washington,” said Kevin McLaughlin, the executive director of the NRSC. “He is a swamp creature that claims to be conservative. … Now, having made an emotional, ill-informed and selfish decision, he finds himself at a crossroads. Republicans who are working to reelect President Trump and retain the Senate majority hope he has a moment of clarity, does the right thing and walks away from this poor decision. Otherwise, voters will make it for him.”

In a statement, Loeffler spokesman Stephen Lawson praised the senator’s record in Washington during her short tenure.

2 US Senate seats on the ballot

GOP Gov. Brian Kemp appointed Loeffler, a businesswoman and co-owner of the Atlanta WNBA team, to fill the seat vacated after Sen. Johnny Isakson retired in December
due to health concerns — even though the President
urged Kemp to pick Collins. But the unusual setup of the special election has alarmed Senate Republicans because, they argue, multiple GOP candidates could split the electorate and elect a Democrat in November. 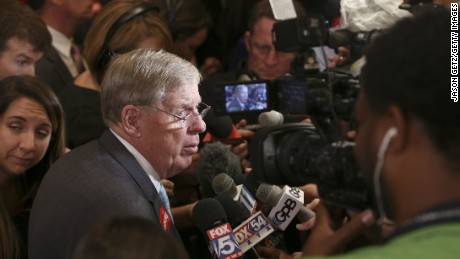 The special election won’t have a typical party primary. Instead, all the Democratic and GOP candidates will compete in the general election in November. And if one candidate gets above 50%, they will be elected to the Senate. If no candidate reaches a majority of the vote, then there will be a two-person runoff in January.

Republicans worry that a bitter battle between Loeffler and Collins will divide their voters and make it easier for the Democratic candidate to secure a majority vote in the fall. Some state legislators, including some of Collins’ allies, have pushed to change the rules to end the free-for-all and create party primaries in the race. But that prospect appears unlikely, especially since Kemp has threatened to veto the bill.

Instead, Senate Republicans are privately hopeful that Collins changes his mind and decides to run for his House seat since the filing deadline isn’t until March 6. Collins was forced to give up his leadership spot atop the influential House Judiciary Committee as he pursued the Senate seat, but at the request of the congressman, the House GOP made clear that the change won’t take effect until March 12, according to GOP sources.

Moreover, there’s also another Senate seat on the ballot in the fall: David Perdue of Georgia. And there are fears that the nasty party fight could spill over to Perdue’s race — and undercut his ability to secure an outright win in November.

“I don’t like to see two Republicans fighting each other in a jungle general election, very unusual setup here,” Perdue told CNN. “And I don’t think that’s good for anybody in Georgia.”

Asked if he’s supporting Loeffler, Perdue said: “I have one objective and that is to get this President reelected. The second objective is get myself reelected. And right now, we have a sitting US senator, and I’m doing everything I can to help her be effective up here.”

Democrats hope they can benefit off GOP infighting

The GOP divide has given Democrats’ new hope in the state, whose changing demographics and rapidly growing population could help them win not only its first Senate seat in Georgia in 20 years, but also pick up a few House seats and even the White House. Democrats running in the Senate race against Loeffler and Collins include Rev. Raphael Warnock,
Matt Lieberman, son of former Connecticut Sen. Joe Lieberman, and Ed Tarver, who served as a US attorney during the Obama administration. Other Democrats are also hoping to unseat Perdue this November. Warnock, the leader of Atlanta’s historic Ebenezer Baptist Church, has already gained the support of the Senate Democrats’ campaign-arm and state leaders like Stacey Abrams.

“Having Congressman Collins in the race is not something we asked for, but we’ll figure out how to navigate the situation and ensure all of our Republican colleagues are successful,” said Sen. Todd Young, chairman of the NRSC. “He’s got a bright future ahead of him — he has to decide what’s right for him and his family.”

Collins, a chaplain in the Air Force Reserve who previously worked as a floor leader in the Georgia House, has strong ties to the base of the state party and proven himself as one of Trump’s key defenders during the House impeachment proceedings.

Loeffler, a major GOP donor and a first-time politician, immediately came under attack from anti-abortion groups for serving on the board of a major hospital in Atlanta. In November, Susan B. Anthony List President Marjorie Dannenfelser said that alone “should disqualify her.”

But this week, in a sign of how conservative groups are coalescing behind Loeffler’s candidacy, the anti-abortion group’s candidate fund endorsed her. The conservative Club for Growth, which has spared with the NRSC in the past, has also announced plans for a multi-million ad campaign against Collins.

The race has quickly turned into a contest for who can earn Trump’s praise. Loeffler has expressed her support for Trump, while the NRSC’s McLaughlin attacked Collins for withholding his “early support” of Trump despite claiming “to have been there from the beginning.” (In the 2016 Republican primary, Collins first supported then-Wisconsin Gov. Scott Walker.)

During the impeachment trial, Loeffler said that Sen. Mitt Romney, a Utah Republican, wanted
“to appease the left” in calling for witnesses during the impeachment trial, a highly unusual broadside launched by a sitting senator of the same party. Collins’ campaign then criticized her in a digital ad for donating nearly to Romney’s presidential races while giving nothing to Trump’s 2016 campaign.

Some Collins strategists told CNN that the NRSC was privately blunt about the challenge in running against Loeffler.

A Collins strategist said the NRSC “desperately wanted to get a hold” of Collins the day before his announcement “to try and convince him not to run against Loeffler.”

“There was a lot of talk about the amount of money that she and her husband were going to spend,” said the Collins strategist. “That’s not going to deter Doug.”

CNN’s Ted Barrett and Dana Bash contributed to this report.

Evelyn Yang is the bravest woman I know