House Intelligence Chairman Adam Schiff, the former federal prosecutor who presided all fall over the House inquiry into Trump’s Ukraine pressure campaign, closed the arguments for Democrats by trying to head off some of what Trump’s defenders will say in their rebuttal. The California Democrat chiefly focused on making the point that Republicans, regardless of their personal feelings about the President, should realize he’ll put himself over the country again and again.

The Democrats are arguing that, in the American system, no one should be above the law. But Trump’s Department of Justice says he can’t be indicted, which is at least part of the reason the Mueller report did not recommend charging him as part of the Russia investigation that consumed the first half of Trump’s presidency before concluding last year.

Trump’s fateful
phone call with Ukrainian President Volodymyr Zelensky came July 25, the day after Robert Mueller’s last testimony on his investigation. Democrats outlined the White House effort to squash their investigation into Trump’s efforts to hold up taxpayer-funded, congressionally approved aid to Ukraine, and the unprecedented lack of cooperation between the branches of government as they tried to find out what happened.

Upsetting the balance of power

Trump came into office with Republicans holding both chambers of Congress. He refuses to cooperate with Democrats now that they control the House of Representatives. That leaves him accountable to no one but the Supreme Court and the Electoral College, which gives more power to the less populous states where he draws his power. This is not the system of checks and balances envisioned by the Constitution. But the idea that things are out of whack may not be enough to convince any Republicans to remove their President from office.

Imagine how he’ll act in January 2021

House Judiciary Chairman Jerry Nadler, who earlier this week accused the Senate of a cover-up for not issuing subpoenas to the administration, today
accused Trump of acting like a dictator for ignoring lawmakers. 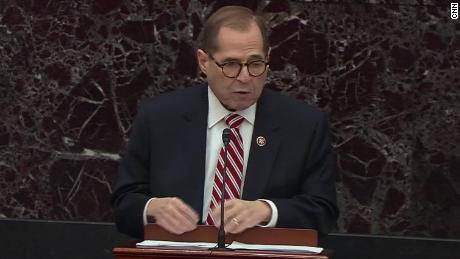 If Nadler thinks Trump is overbold now, wait until he is acquitted. And then, maybe, reelected.

John Dean, the Watergate-era Nixon aide, made an interesting point about this Thursday on CNN: “I have the most trouble, not if he gets away with this, but if he gets reelected, we have a president who is unchecked, unchecked, and our democracy has changed dramatically.”

This is bigger than US politics

Before Nadler’s declaration that Trump is a dictator, Schiff had spent hours talking about the importance of the US in the world and the danger of Russia, Ukraine’s neighbor.

People throw around the notion that the US is a model of democracy for the world. Schiff’s argument went into great detail to drive it home and pushed the idea that Trump’s actions in Ukraine, emboldening Russia and making US allies question American reliability, is as damaging as the imbalance the President has caused in the domestic balance of power.

Trump was captured on tape at a 2018 dinner with Lev Parnas and Igor Fruman — the former Rudy Giuliani associates who were recently
indicted on campaign finance charges — demanding the firing of Marie Yovanovitch, who was then the US ambassador to Ukraine, according to an attorney for Parnas. (CNN has not reviewed the tape.)

Pompeo blows up at reporter over Ukraine

When an
NPR reporter asked Secretary of State Mike Pompeo about his lack of support for Yovanovitch, it did not go well.

During the interview, Pompeo said he had defended State Department employees. But Mary Louise Kelly asked specifically where he had defended Yovanovitch, who conservatives had pressured Trump to fire and who, it appears, had been under surveillance of some kind by associates one step removed from the President’s lawyer. 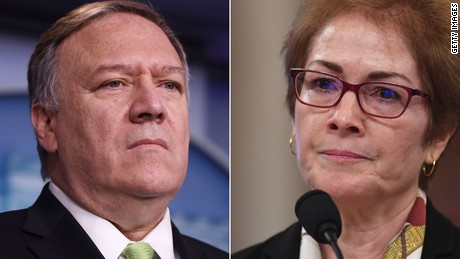 Pompeo had no answer. He later blew up at Kelly, hurling expletives at her in his office, according to NPR. And he asked her to point out Ukraine on an unmarked map, which she did.

A ghost in the Senate chamber

There was a striking moment today when Schiff brought an old voice back into the chamber as he talked about the threat posed by Russia. He played video of Sen. John McCain of Arizona, Trump’s Republican nemesis and a great foe of Russia, who died in 2018.

It was a reminder of how much the party has evolved with Trump as its standard-bearer.

After Trump’s defenders have their say and senators have an opportunity to ask written questions, it will be time for the senators to consider calling additional witnesses. The White House has not cooperated with the inquiry, so there are plenty of potential targets.

The final words Democrats uttered in their opening arguments were about witnesses.

“Give America a fair trial. She’s worth it,” Schiff said.

It’s not clear if Senate Democrats will get the four Republican votes they would need to side with them in favor of witnesses.

“It’s not the Senate’s job to clean up after what the House did,” White House press secretary Stephanie Grisham said Friday on Fox News, opposing witnesses.

“The bottom line: We’re seeking the truth at a momentous time in the American republic. It is on the shoulders of four Republican senators to join us in demanding it. We’ve made the argument forcefully,” Schumer said.

The President has invited foreign powers to interfere in the US presidential election. Democrats impeached him for it. A Senate trial is happening now. It is a crossroads for the American system of government as the President tries to change what’s acceptable for US politicians. This newsletter will focus on this consequential moment in US history.

Hamburg, Iowa: The impact of the climate crisis on the 2020 election