Skip to content
Uncategorized
February 4, 2020
Trump will speak from the very chamber where
he was impeached by the House late last year, addressing a Congress that remains bitterly divided over whether he committed high crimes and misdemeanors in his effort to pressure Ukraine into investigating a political rival.
Sitting behind him on the dais will be House Speaker Nancy Pelosi, who oversaw the impeachment efforts after initial resistance.
The two haven’t spoken in months.

Trump’s aides insist his speech will be forward-looking and optimistic, despite the deep grievances he fosters over being impeached. His Republican allies have encouraged him to steer clear of the divisive impeachment. And Trump himself insisted during a weekend interview he wasn’t considering moving the speech to a less auspicious date.

Still, the topic could arise in some manner, according to one official, though won’t be the main focus of his address. 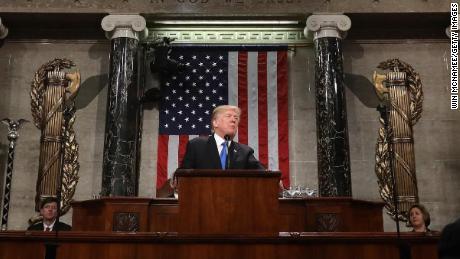 Instead, Trump will seek to highlight a strong American economy, defeats of American enemies abroad and his plans on health care and infrastructure — all making the case for his reelection in November.

A meltdown in reporting the results of Monday’s Iowa Democratic caucuses deprived any one candidate of a momentum jolt heading into Tuesday.
Earlier Tuesday,
a Gallup poll showed
Trump reaching the best numbers of his presidency, with 49% of respondents approving of his job performance and 50% disapproving.

The theme of the speech is the “Great American Comeback,” according to administration officials, with specific focus on areas like a “blue collar boom,” lowering health costs and immigration.

Trump hopes to convince one of the year’s biggest television audiences that his ideas and record warrant another four-year term, despite having been only the third president in US history to be impeached.

Trump and his aides once hoped to use the speech as a victory lap of sorts following an acquittal vote. But a procedural compromise extended the trial into another week and now a final vote on the two impeachment articles won’t come until Wednesday afternoon.

While he won’t be the first to address Congress mid-trial — President Bill Clinton delivered his 1999 State of the Union just as arguments were getting underway — Trump will be the first president to be impeached before facing voters, lending an unpredictability to the coming campaign. The themes he lays out on Tuesday are expected to form the core of his message in the coming 10 months.

“We’ve done a lot, and we’ve achieved a lot — as much or more than anybody over the first three years — and we’re really looking to giving a very, very positive message,” Trump told reporters Sunday at his West Palm Beach, Florida, golf club, where he was hosting a Super Bowl party.

He spent part of the weekend preparing for the speech, which a team of speechwriters has been drafting for months. Typically, White House aides solicit recommendations from across the administration for ideas to include in the speech. 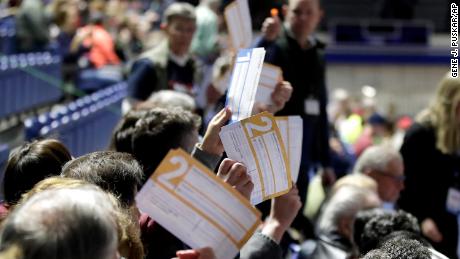 Trump has offered his own themes and specific lines that will be included in Tuesday night’s address, often scrawling them out in Sharpie on pieces of paper that are then delivered to his writing team. He’s expected to rehearse his delivery from the White House basement earlier in the day.

It’s Trump’s third State of the Union speech and his fourth address to a joint session of Congress. He’s stuck mostly to script during his past speeches.

The White House has announced two guests meant to underscore Trump’s message: Army veteran Tony Rankins, a former addict who has benefited from one of the administration’s “opportunity zone” job training programs, and deputy chief of the US Border Patrol Raul Ortiz.

Aides have acknowledged that last minute changes to the text — including possible references to the impeachment — are always possible. Trump and his team of advisers often revise his speeches up until the moment of delivery.

“It wouldn’t be out of the ordinary for the speech to evolve before it’s delivered,” an official said.

In the days leading up to the speech, Trump flashed anger at Democrats for impeaching him, downplaying the prospects he’d be able to work across the aisle in the year ahead.

“It’s pretty hard when you think about it,” Trump told Fox News. “I’m not sure that they can do it, to be honest. I think they just want to win. And it doesn’t matter how they win.”

Republicans in Congress — who will comprise Trump’s audience on Tuesday along with Democrats, members of the Cabinet,
Supreme Court justices and foreign ambassadors — have hoped for a speech that avoids mention of impeachment, even if they aren’t entirely confident it won’t.

“If I were him I’d avoid that subject. There’s plenty to talk about and it’s time to move on,” said Sen. Roy Blunt, a Republican from Missouri. “But the other option is to address it head-on and he often is a head-on kind of guy.”

“It’s just not what I would do. But Donald Trump’s Donald Trump. He’s the only Donald Trump we know, and I suspect he’ll be himself,” said Sen. Kevin Cramer of North Dakota.

“I mean, I wouldn’t,” said Sen. Marco Rubio, before acknowledging: “It’s his State of the Union.”

At Trumps State of the Union, the bigotry was in plain sight