“When you call a foreign leader, people listen. I may end the practice entirely, I may end it entirely,” Trump said in an interview with Geraldo Rivera.

Trump has repeatedly cited how many people were on his July 25 call with Ukrainian President Volodymyr Zelensky as a justification for why he would not have acted improperly by asking for investigations into the Biden family or a baseless theory that Ukraine interfered in the 2016 election.

But in recent weeks he has become preoccupied with the idea that someone could leak what he says on a future call with a foreign leader, sources familiar tell CNN. 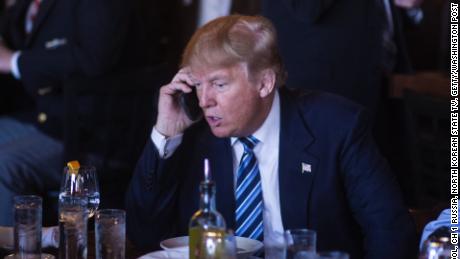 Calls with world leaders are highly coordinated events that in the past have required careful planning by the President’s national security team. During a typical call between a US president and a foreign leader, dozens of officials can join the call. Some are in the room with the President, such as the national security adviser or secretary of state, but many listen from remote locations or the Situation Room. Trump has developed a habit of calling world leaders from the White House residence.

Vice President Mike Pence or his national security adviser often join the President’s calls, as does the National Security Council’s senior director for the head of state’s region. Two aides typically listen to develop and produce a memorandum, or transcript, of the call after it ends.

Typically that readout, or summary, of the call is published. In July 2018, the White House suspended the practice of publishing public summaries of Trump’s phone calls with world leaders, bringing an end to a common exercise from Republican and Democratic administrations. They have since resumed the practice.

Katherine Johnson, famed NASA mathematician and inspiration for the film Hidden Figures, is dead at 101

October 1, 2020 : The Union Ministry of Home Affairs (MHA) on September 30 has issued Unlock 5 guidelines for